The Union government will appoint a committee of enquiry to probe the crash of a small air ambulance in a residential area in neighbouring Faridabad on Wednesday. Ten people, including all seven onboard, were killed in the freak tragedy.

The committee will also make recommendations to prevent such accidents, the Union Civil Aviation Ministry said in a statement on Thursday. A preliminary report has been received by the Ministry.

The nine-seater aircraft of Air Charter Services India Private Limited on its way from Patna to Delhi was carrying a 20-year-old jaundice-afflicted Rahul Raj, doctors Rajesh Jain and Syed Arshad Abbas and nurse Cyril Joy employed with the Apollo Hospital, Delhi, and a cousin of the patient.

The crash killed all seven and also three women — Sarita, Vedvanti and Rani — when the plane smashed into their house.

A Directorate General of Civil Aviation team has inspected the site.

According to DGCA Director of Air Safety (Delhi) Ram Nath, who was present at the site, the strong winds could have caused the small single engine turboprop to crash. “Based on our initial investigations, it appears that strong winds and stormy weather may have been responsible for the incident,” he said.

“Such small aircraft do not have a cockpit voice recorder or black box which can help in ascertaining the cause of these kinds of incidents. The black box could have helped us gather more information about the incident,” he added.

Delhi airport sources also said sudden bad weather could have been responsible. “On Wednesday the weather was not favourable in the areas adjoining the capital and several aircraft were deviating from their path as there were very strong winds,” said sources.

However, a technical malfunction may also have been a contributory factor as the pilot had communicated to the Delhi Air Traffic Control that the aircraft was unable to withstand the strong winds at an altitude of 8,000 feet. Though the ATC asked the pilot to maintain the altitude, he could not do so and the aircraft began to descend.

The last contact of the pilot with the ATC was reportedly around 10.45 p.m. 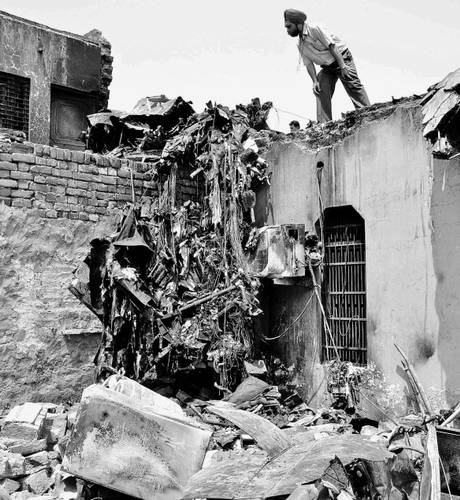