Intimate glimpses of the life of a community, vignettes from their culture and people at their unaffected best have been movingly captured by veteran photographer Ketaki Sheth in an exhibition on the Sidi, little known Indian tribes of African descent.

Between 2005 and 2011, Ketaki travelled through Gujarat, Bombay, Goa, Hyderabad and the forests near Manchikere in Karnataka, clicking the Sidi. Elaborating on the complex process which yielded these photographs, Ms. Sheth said in an email, “As an outsider to a small community, I had to make sure I won their confidence and friendship. I took time to photograph them and returned with their pictures; slowly a friendship formed and I owe this to the three Sidi I have dedicated my book to.” The exhibition takes its title, ‘A Certain Grace. The Sidi: Indians of African Descent’, from her book which was launched earlier this year.

These bold and arresting pictures, all in black and white, are striking in their grace and spontaneity and depict the community in a range of contexts and moods — the Sidi at home, at work, at music and dance, at festive and religious ceremonies.

The pictures arouse a medley of emotions — ranging from the easy camaraderie of young boys, to the protectiveness of sisterhood, the cheekiness of youth, the shy delight of a bride-to-be, to the chutzpah of elderly women. The pictures of the Sidi also contain a great deal of natural imagery, such as forests, water and animals.

According to an artiste statement by Ms. Sheth, the Sidi arrived in India well over 500 years ago as seafarers, merchants and slaves from the east coast of Africa. Her book on the Sidi also contains an introduction to the community by Prof. Mahmood Mamdani, a prominent Ugandan academic of Indian origin. According to Prof. Mamdani, the Sidi migrated to India over successive historical periods as traders, armed African sailors, pearl divers and as slave-soldiers.

The Sidi in India have predominantly Scheduled Tribe (ST) status. According to the Union Ministry of Tribal Affairs website, the Sidi have ST status in districts of Goa, Gujarat, Karnataka and Daman and Diu. Talking of discrimination against them, Ms. Sheth says she is aware of instances of racial barbs and problems with getting a passport. She mentions the instance of a Diu-based Sidi who was discouraged from joining the Indian Army, after people told him that he would not be accepted.

“I think the real problem is that their ST status does not always get them the benefits they ought to get and some Sidi feel that other tribes are more fortunate,” she says.

Prof. Mamdani in his essay also quotes the Sidi who say that unlike other tribes, they have not been able to organise well. The lack of Sidi in politics, teaching and medicine has resulted in their not being aware of their rights.

Over the centuries, the Sidi have embraced local language, dress and food, but retain a distinct African heritage in their appearance, dance, music and spiritual practices. Though most Sidi live in rural areas, they are also in cities such as Mumbai, small towns and cities in Gujarat. Their religious composition is diverse — they are Sufis in Gujarat, Mumbai and Hyderabad; and Christians and Hindus in Goa and Karnataka respectively.

Some of the most memorable imagery in the exhibition is of women. The images of Reshma, a part-time student and farmer; Hirbaiben Lobi posing on her three acre farm; the cigarette-puffing Aminaben and the strikingly beautiful Rizwana are hard to forget, and linger on.

“I found the women to be strong, fearless and dynamic,” says Ms. Sheth, citing the instance of Hirbaiben Lobi, a farmer who employs Sidi women in her local organic manure business and is also celebrated for organising around 600 women from households where men would drink and gamble. There are other examples — of Farida who holds a bank job and spends her free time helping out in her community and Salmaben who has helped women resolve family and land-related problems.

Ms. Sheth has been interviewed by a Johannesburg radio show and also been contacted by galleries and academics in relation to her work with the Sidi. But she is not sure how aware people in Africa are of the Sidi, or for that matter, if there is awareness of the community even in India where they live.

The exhibition which is on till November 3 at the Jaipur Gallery, National Gallery of Modern Art, Delhi, is presented by NGMA in collaboration with Photoink.

Fears of returning home haunt the victims of the Muzaffarnagar riots 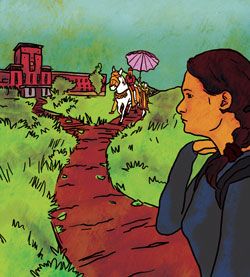 A journalist reflects on her desire to leave her job as opposed to her family's wishes for a safe, predictable existence