Published by Bulletin of the Atomic Scientists. 2 September 2022

The world was still deep in the clutches of the global COVID-19 pandemic in April 2021 when Vakisasai Ramany, a senior vice-president of Electricité de France (EDF), a major French electric utility company, traveled to India. The purpose of this unusually timed business trip? The delivery of a technical and commercial offer for nuclear reactors—in person.

During his visit, Ramany met with officials of the Indian Department of Atomic Energy (DAE) and the Nuclear Power Corporation of India Limited (NPCIL), the state-owned company that operates most of India’s nuclear power plants. The French executive submitted a long-delayed techno-commercial offer to supply engineering studies and equipment for the construction of six European Pressurised Reactors (EPRs) at the Jaitapur site in Maharashtra, India. The project, touted as “the most powerful in the world,” consists of a nuclear power plant with a total installed capacity of 9.6 gigawatts electric. That’s the offer on paper, anyway. But, EPRs so far have had a significantly troubling record of cost and time overruns. The proposed Jaitapur mega-project has faced strong protests from local residents and environmental activists. With the cost of these reactors likely to be in the tens of billions of dollars, stakes are high for the French nuclear company to conclude its deal in India.

The history of the French connection. In 2008, India and France signed a bilateral agreement for civilian nuclear cooperation on developing nuclear energy. The agreement was one result of an agreement with the United States that allowed India to conduct nuclear trade with other countries—which it could not do since the country conducted nuclear weapons tests in 1974 and 1998 and was placed under US sanctions.

India’s first nuclear test in 1974 provided the impetus for the creation of what was to become the Nuclear Suppliers Group, a trade consortium set up by countries involved in exporting nuclear energy technologies. The group set up the requirement that nuclear technology and materials should be exported only to countries that had signed the Nuclear Non-Proliferation Treaty (NPT), which entered into force in 1970. By 1974, however, India was not a signatory of the NPT—and still is not. As such, it was not allowed to purchase reactors or uranium. Following an agreement in 2008 between India’s Prime Minister Manmohan Singh and US President George W. Bush, the US government used its political power to force many reluctant members of the Nuclear Suppliers Group to execute a special waiver for India. Many countries, especially France and Russia, supported the waiver, sensing the business opportunities from India’s rapidly expanding energy market.

Following the India-France bilateral agreement, India’s NPCIL and the French nuclear-maker Areva signed an agreement in 2009 for the supply of two to six EPRs. But soon after Areva became in major financial trouble and was taken over by EDF in 2016.

EPRs are a type of pressurized water reactor built through French and German collaboration. The reactors are touted to have better safety features than earlier designs, including a double barrier to ensure the containment of radioactive materials in case of accidents. They are also supposed to resist extreme hazards like earthquakes, flooding, and extreme temperatures.

With its submission of a new techno-commercial offer to India, EDF’s Ramany says the company is moving toward “the concretization of the largest nuclear power plant in the world [with the] fully proven EPR technology.”

Despite EDF’s hope that the reactors would shortly become operational, negotiations with NPCIL have stalled over the last decade for several reasons, including cost, increasing doubts over their performance, disagreement over liability in the case of a reactor accident, and local protests.

And that’s not to mention the problems EPR projects—both under construction and in operation—have encountered in different parts of the world.

Delayed and over budget. The earliest EPR project (Olkiluoto-3) began in Finland in 2003 and was connected to the grid in March 2022—a full 13 years behind schedule. It has yet to begin operations. Two EPRs are under construction in the United Kingdom (Hinkley Point C-1 and C-2), and one in France (Flamanville-3) is also under construction. The proposed two-unit EPR plant at Hinkley Point, originally scheduled to start operations in 2025, has already been delayed to June 2027 and will cost £3 billion ($3.6 billion) more than initially proposed, taking the budget to an estimated cost of £25 billion ($29.6 billion). For its part, the Flamanville-3 reactor is over a decade behind schedule, and its budget has ballooned from €3.3 billion to €12.7 billion.

The world’s first two EPRs—Taishan-1 and Taishan-2—became operational in China in 2018 and 2019, respectively. However, unit 1 had to be shut down in July 2021 because of damaged fuel rods, in what an EDF spokesperson told CNN at the time was a “serious situation.”

A good fit for India? Physicists Suvrat Raju and MV Ramana have questioned the safety and economics of the EPR reactors proposed for the Jaitapur site. In 2013, they calculated that electricity from the proposed reactors at Jaitapur would cost 15 Indian rupees (18 US cents) per kilowatt-hour, based on the construction costs of EPRs in Finland and France. Since then the costs of EPR construction have escalated while the cost of alternatives, especially solar energy, has declined sharply.

In an interview for this article, Ramana said: “The costs of the EPRs being built in Western Europe have gone up, while costs of renewable sources of energy, especially solar photovoltaics, have declined. In 2020, one solar project developer offered to sell electricity at the especially low rate of Rs. 2 [Indian rupees] per kWh, and it is routine to find projects proposed for around Rs. 2.50 per kWh.”

Importantly, however, the total amount that the Indian government will spend on this project has still not been made public. In 2019, EDF said the cost is “confidential and may not be disclosed.” It also refused to release the cost per unit of electricity.

EPRs’ problems are not restricted to massive cost overruns and significant delays. “In addition to the high costs, safety problems with the reactor design and construction have emerged in several EPRs,” Raju and Ramana wrote in 2019. Serious problems occurred during the manufacture of the reactor pressure vessel of the EPR at Flamanville in France, with parts of the vessel found to have too much carbon. (A too-high carbon concentration in the steel of the reactor vessel can lead to lower than expected mechanical properties, which can thereby compromise its safety. The reactor vessel acts as a key barrier against radioactive materials escaping from the core.)

Moreover, the proposed site for the six EPRs in Jaitapur—a seismically active and fertile agricultural and fishing region—has left some 40,000 people in five villages concerned for their safety and impact on their livelihoods. Even though the villagers evicted from their land received monetary compensation, they regret losing access to their agricultural and fishing resources.

Why is India so interested in buying French reactors? Despite the questions about the performance of EPRs, successive Indian governments have expressed their commitment to the deal. But why is India pressing ahead? Raju and Ramana point to the unusually candid explanation offered by Anil Kakodkar, a former secretary at the India Department of Atomic Energy, who said: “We also have to keep in mind the commercial interests of foreign countries … America, Russia, and France were the countries we made mediators in these efforts to lift sanctions, and hence, for the nurturing of their business interests, we made deals with them for nuclear projects.”

Kakodkar was referring to the India-US nuclear deal of 2008. Three countries were supposed to particularly benefit from that deal: the United States, France, and Russia. The three countries signed agreements with India for the supply of foreign reactors. To date, Russia is the only foreign country to have operational reactors in India, which started even before the 2008 nuclear deal between India and the United States. US reactors, however, were not sold to India because of Westinghouse’s financial troubles. For its part, France was specifically allotted the Jaitapur site for building EPRs.

According to a 2009 diplomatic cable made public by Wikileaks, a representative from NPCIL admitted India was paying a “high price” for the French reactors. Indeed, Indian diplomatic sources have reportedly expressed discontent about the high cost of the French EPRs compared to US and Russian reactors. Yet, when Indian and French political leaders meet, they almost always reiterated their joint commitment to the EPR deal as when, in May 2022, Indian Prime Minister Narendra Modi and French President Emmanuel Macron in France reaffirmed their commitment to “the success of the strategic Jaitapur EPR project.”

A clear subtext of these statements is the high stakes in the Jaitapur project for the French nuclear industry, especially EDF in which the French government has 84 percent ownership. EDF faces several problems in addition to its EPR woes: It is in debt for approximately $45 billion, and faces outages at some older plants and also declining power output from some plants, a result of hot temperatures and lack of rain that result in insufficient river water to cool nuclear reactors. Some of EDF’s reactors are also offline for planned maintenance and repairs. This makes it all the more crucial for France to want to seal the deal with India.

“If confirmed, it would be one of the biggest-ever export deals for the French energy giant,” Reuters reported in May.

After submitting the techno-commercial offer to the NPCIL, EDF promised the project would produce local jobs in India, not forgetting to mention the benefits at home: “The project would also generate significant economic benefits for the French nuclear industry over the entire duration of the project (approximately 15 years), with tens of thousands of jobs in the hundred or so involved French companies.”

As France stands to benefit greatly if the deal comes to fruition, it is no surprise an EDF vice-president traveled to India in the thick of a pandemic to submit an in-person binding techno-commercial offer. But if the purchase of six EPR reactors would be an obvious win for the French nuclear industry, it is less clear what benefits the people of India would obtain. 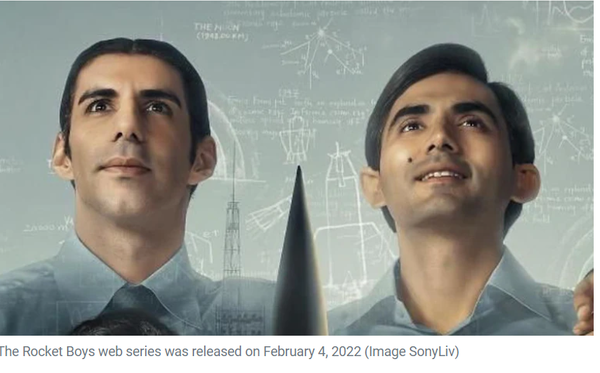 While Rocket Boys makes for engaging drama, does it tell this story with due diligence to scientific and historical facts? Unfortunately, the answer is resoundingly in the negative.