Published in Bulletin of the Atomic Scientists. 17 December 2021

In Southeast India, in the dense interior of the Nallamala Hills, deciduous trees, shrubs, and brambles sprawl over the undulating land of the Amrabad Tiger sanctuary. Here, 14 tigers  prowl the jungle with boars, sloth bears, and panthers as company. Insects buzz, waterfalls gush, and wild animals grunt, but the heavy machines once scheduled to drill 4,000 boreholes into the earth in search of uranium are absent and silent—at least for now.

In 2019, the Indian government approved prospecting for uranium mining in the tiger sanctuary as it considered the resource “a critical and immediately needed commodity to generate nuclear power.” Meanwhile, a site inspection report noted the environmental impact of the mining project would include “erosion, formation of sinkholes, loss of biodiversity, and contamination of soil, groundwater, and surface water by chemicals.” Also, the project would have displaced the Chenchu hunter gatherer community. Human rights activists, tribal communities, environmental groups, scientists, and film celebrities mounted strong resistance, prompting the government to withdraw the proposal in September 2021. Still, many worry that the success will be fleeting as the government still plans to build new nuclear reactors.

“The opposition was so widespread that even political parties were forced to side with the protesters,” K. Babu Rao, a former senior scientist with the Indian Institute of Chemical Technology, said. Given the Indian government’s long history of antinuclear suppression, many citizens remain concerned about the uranium-mining plan—and other nuclear developments the government is pressing.

Kudankulam: India’s longest antinuclear struggle. Two years after the 1986 Chernobyl nuclear disaster, India and the erstwhile Soviet Union entered into an agreement to build a nuclear power plant in Southern India, at Kudankulam in Tamil Nadu’s Tirunelveli district. Ever since, thousands of farmers, fish workers, environmental groups, students, and concerned citizens have periodically protested the reactors. In one mass rally in 1989, more than 10,000 people demonstrated against the project.

Protesters opposed and still oppose the Kudankulam reactors for many reasons, including concerns about the release of radioactive contaminants into the environment, threats to marine life and human health, loss of fishing livelihoods, and fears that the reactors may serve as a conduit for building nuclear weapons. Also, the reactors are located in an earthquake zone. Finally, the devastating 2004 Indian ocean earthquake and tsunami affected parts of Tamil Nadu state, and the memory lives on in the area.

Work on the first two Kudankulam reactors gained momentum between 2001 and 2002. Later, when the Fukushima nuclear reactor melted down in 2011, simmering Indian antinuclear opposition spiraled into full-blown opposition. Residents in the vicinity of the project and concerned citizens did not want a nuclear power plant. The Indian nuclear establishment, including the Department of Atomic Energy and the Nuclear Power Corporation of India Limited, responded with indifference, which added to discontent.

When protests broke out, the police and paramilitary forces fired shots and tear gas. They also lathi charged into the protesters and beat them with sticks. At least two people were killed in 2012 and several others were injured. Kudankulam protesters have also faced false legal cases. A 2012 report commissioned by a coalition of anti-nuclear groups and individuals on suppression of democratic rights in Kudankulam found numerous instances of arbitrary implementation of tough laws:

By filing cases of sedition, waging war against the Government of India, and promoting disaffection between groups of persons, people are being unnecessarily harassed by the misuse of criminal law, and their constitutional rights are being violated… Persons who are protesting cannot be branded as anti-national and unpatriotic, and peaceful protests cannot be equated to sedition or waging war against the state.

India’s sedition law dates back to 1870, when the British ruled. It was used against freedom fighters, including Mahatma Gandhi, in the struggle for Indian independence. Despite urgent calls to repeal the law, it is still used today to harass dissenting individuals. Nearly 9,000 people have been charged with sedition for protesting against the Kudankulam nuclear power plant. Some cases persist today, even though the Supreme Court ordered the dismissal of all criminal cases against the protesters.

“The Kudankulam protests were unprecedented, both in terms of the scale of the movement and its repression. It brought to center-stage the question of inter-generational justice and the planet that future generations will inherit,” Sonali Huria, a 2020 research fellow with the Takagi Fund for Citizen Science, said. Farmers, fishermen, scientists, lawyers, NGO workers, professors, and religious preachers banded together in their opposition to the reactors. In 2011, the People’s Movement Against Nuclear Energy formed as part of the opposition to the Kudankulam reactors.

“The threat of displacement, radiation, and the safety question brought these otherwise different groups together,” Patibandla Srikant, a researcher, wrote.

Indian citizens mounted robust resistance against west coast reactors. Another antinuclear resistance movement emerged in 2006 near Jaitapur in the state of Maharashtra, on India’s West Coast south of Mumbai. Protesters organized against the proposed construction of six European pressurized reactors to be imported from France. The location was again in a seismically active, fertile, agricultural, and fishing region, which left some 40,000 people in five villages concerned for their livelihoods.

Residents labeled the 2010 public hearing on the project a farce. The flawed environmental impact assessment report marked cropland and orchards as wasteland. Angry residents and their supporters demonstrated in large numbers. In at least one demonstration, the police opened fire, killing a local resident. Agitators, many of whom were poor farmers and fisherfolk, were arrested for arbitrary reasons. The police issued notices that barred activists from entering the district of the proposed reactors.

Activists also challenged the Jaitapur plant on persistent safety and cost concerns about European pressurized reactors. Activists Vivek Monteiro and Mangesh Chavan filed public interest litigation in 2013, challenging the project on technical and environmental grounds. The petition has yet to be heard.

Activists also filed petitions in the courts and with the National Green Tribunal—a governmental body responsible for dealing with and expediting environmental protection and forest conservation cases.

RELATED:Wildfires break out in Chernobyl amid a non-functioning radiation-monitoring system

For now, the protests at Jaitapur are dormant. The French company Areva, which had agreed to supply the nuclear reactors at Jaitapur, went bankrupt. The original five-year environmental clearance for the project has lapsed.

Yet earlier this year, the French firm Electricite de France, which took over the bankrupt Areva, submitted an offer to India’s Nuclear Power Corporation for supplying engineering studies and equipment to construct six European pressurized reactors. The nuclear industry is hopeful that they will build—and earn billions of euros from—the reactors at Jaitapur.

Monteiro is certain that if construction activities begin, protests will revive. But dissent has become dangerous in India. In recent years, the government has charged citizens with sedition and other laws.

“The present Bharatiya Janata Party government is going after anyone who criticizes its policies,” SP Udayakumar, coordinator of the People’s Movement Against Nuclear Energy, said. Udayakumar, who was charged with sedition during the Kudankulam protests—a charge that persists—added, “but people continue to fight nuclear expansion in different parts of the country.”

Udayakumar’s 2012 sedition charge took place when the Indian National Congress party was in power.  This party initiated many of the country’s nuclear energy programs, including the Kudankulam nuclear power plant. The Bharatiya Janata Party, which came to power in 2014 under Narendra Modi, has greatly expanded India’s nuclear energy ambitions—and the number of sedition cases has also significantly risen since then too.

Government response to past antinuclear resistance may foretell the future. In 2017, the Indian government canceled a proposal from the American corporation Westinghouse to build AP1000 reactors in Mithivirdi village of the western state of Gujarat. But there was a catch. The project, which had been located in Prime Minister Narendra Modi’s home state of Gujarat, where there was public opposition, was shifted to Kovvada in the state of Andhra Pradesh. This state had become “a dumping ground for polluting industries and unsafe technologies,” according to former senior government bureaucrat EAS Sarma.

The Modi government has since announced that it would build 21 new reactors by 2031—heedless of opposition, economics, and risks to health and safety.

This is a “story of [a] sustained peoples’ movement,” journalist Damayantee Dhar wrote, adding that Indian antinuclear protesters have “braved psychological pressure, administrative intimidation, and various other tactics and continued to protest for their land.” The “tactics” have included offers of social responsibility projects and jobs sponsored by the Nuclear Power Corporation of India.

“Even in Nalamalla hills where the government withdrew its proposal for uranium mining, residents cannot drop their vigilance,” Rao said. Since the 1980s, strong antinuclear movements have emerged whenever and wherever the Indian government proposes nuclear power plants and uranium mining.

“The people … have increasingly questioned the need for nuclear power. They haven’t budged,” Krishnakant Chauhan, an antinuclear activist said. “[Indian] citizens will oppose nuclear power, whether in Mithivirdi or elsewhere.” 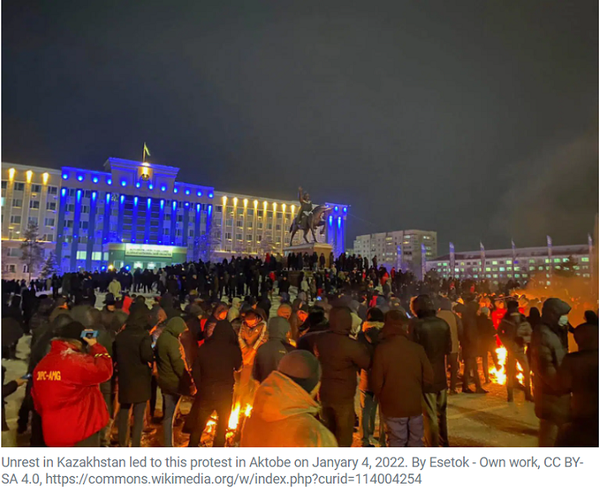 A citizens' uprising takes Kazakhstan by storm. Socio-economic inequalities and neglect of workers' rights might be at play. 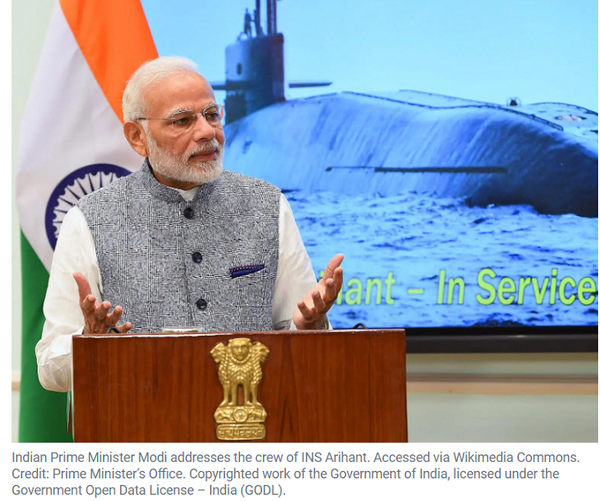